the cuddle sticks at annecy

taken from the 08 annecy site:

SPIKE & MIKE'S SICK AND TWISTED FESTIVAL OF ANIMATION
The best... of bad taste

Spike & Mike's Sick and Twisted Festival of Animation has become an Annecy tradition.

They came from nowhere with nothing to create a market where none existed. By bringing animated shorts to the public, they introduced the world to the likes of Tim Burton, John Lasseter and Nick Park to name but a few. They took chances on films and directors and proved that animation could be cool, not just brat stuff and wholesome family fun.

Once again, Spike Decker, the big man with the big red crown, will hold court at this year's Annecy Festival. The 2008 edition features 26 new films, which Spike has searched far and wide for, as far away as France… and his mailbox!
New titles also include Happy Tree Friends, Breehn Burns' of Dr. Tran fame, The Furious Little Cinnamon Bun, Pat Smith's Puppet, Jeff Chiba Stearns’ crowd favourite Yellow Sticky Notes and many more!

But lest we forget the perverts, they are sure to be satisfied by John Goras’ sequel to Chirpy, Chirpy Returns, and newcomer Mike Geiger and his delightfully sick Cuddle Sticks which Spike proudly puts in the top two most disgusting films ever shown at this special programme.

Come by and say hi to Spike, Joker Head and his entourage – especially if you are a cool French babe! Remember Spike is always looking for the next big thing so bring your film too!
7 comments
Email ThisBlogThis!Share to TwitterShare to FacebookShare to Pinterest 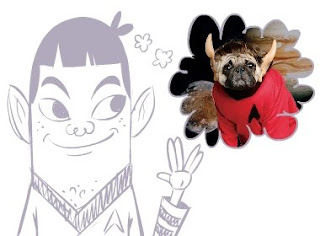 a doodle of a poodle...
1 comments
Email ThisBlogThis!Share to TwitterShare to FacebookShare to Pinterest
Newer Posts Older Posts Home
Subscribe to: Posts (Atom)