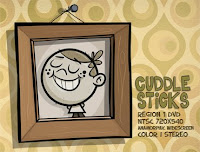 in some more cuddle sticks news...
the film is now a finalist for "best 2d animation" at the 2008 stoke your fires animation festival in england.
exciting!
1 comments
Email ThisBlogThis!Share to TwitterShare to FacebookShare to Pinterest

from the Portland Mercury:

Spike and Mike's has had a loyal following of gross-out fans since 1990, and this year's 26 new films follow the fest's tried-and-true formula, with a couple of old favorites thrown in. Standouts include Mike Geiger's Cuddle Sticks, which features the most disgusting popsicle imaginable, and Jeff Chiba Stearns' Yellow Sticky Notes, which, while neither sick nor twisted, is more than a little touching. And Patrick Smith's Puppet is one of the nicest animation pieces in the batch.

If you're still sitting on the fence, YouTube Cox & Combes' Washington, one of the festival's included shorts: It's a Ween-esque song about the feats of George Washington, by Brad Neely. "Got a wig for his wig/Got a brain for his heart/He'll kick you apart." If it's not enough to convince you of the Tao of Spike and Mike, I'm not sure what is. Who couldn't like the fact that George Washington "made love like an eagle falling out of the sky"?
0 comments
Email ThisBlogThis!Share to TwitterShare to FacebookShare to Pinterest
Newer Posts Older Posts Home
Subscribe to: Posts (Atom)