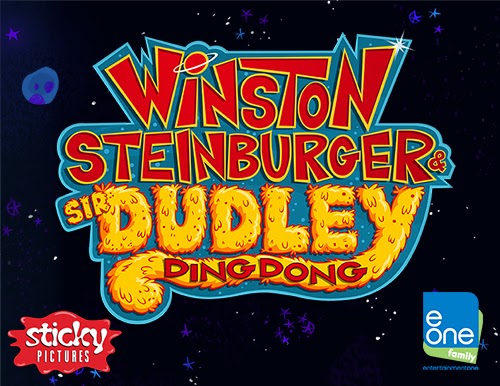 I am very pleased to announce that a show I created called "Winston Steinburger and Sir Dudley Ding Dong" has been officially green lit for production with Teletoon and ABC Australia.
I couldn't be more thrilled and excited to start work on this project that I have been developing with E-One and Sticky Pictures over the last few years, and share it with you in the 2016 season.

Olivier Dumont, MD of Entertainment One Family said, “We’re incredibly excited to be working with Sticky Pictures on what we truly believe to be a fantastically funny and inventive TV show that will hit the sweet spot of kids aged 6-12. Securing ABC3 and TELETOON as broadcast partners at this stage in the production is a clear endorsement of the show’s potential and we can’t wait to bring it to TV screens across the world!”

The new 52 X 11’ animated show for 6-12 year olds follows the hilarious hijinks of Winston Steinburger, his feline best friend Sir Dudley and an uptight alien, Hampton, as they explore the galaxy together in a homemade space cruiser seeking out fun adventures. The three astronomical amigos face death on a daily basis, squaring off against bubbling planets, bad-breathed Space-bandits and the worst nemesis of all – Pam the Destroyer – a tweenie bopper with a manic personality, an itchy trigger finger and a mega crush on Winston.

Donna Andrews (CEO & Partner) from independent Australian production company Sticky Pictures said, “We love Winston Steinburger!  It’s fast, funny and full of cheek.   We’ve been delighted by the response so far from ABC3 and TELETOON and we look forward to working closely with eOne Family to produce the series.”

CHRIS ROSE, COMMISSIONING EDITOR ABC CHILDREN’S TELEVISION comments,
“How could we resist the cheeky chap and his two cute pals? And Pam! The high octane scripts are perfect for the ABC3 audience. From the moment we saw the teaser we knew there was something special about this great new show. “

ALAN GREGG, Director of Content, TELETOON Canada adds, “We’re thrilled to partner with  eOne Family on  this irreverent fast-paced, comedy action series.  TELETOON viewers will fall out of theirs seats when they finally meet the colourful characters of Winston Steinburger. ”
Email ThisBlogThis!Share to TwitterShare to FacebookShare to Pinterest

Congrats Mike!!! You deserve it!!
Ariel